Volterra received a training in Delft 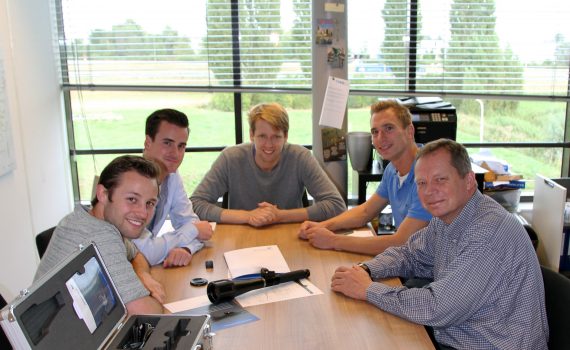 Volterra received a training in Delft

Last 26 of September 2016, Egbert Sonneveld of Volterra visited the Bird Control Group (BCG) in Delft to meet the complete team and to get training on the use of the Agrilaser Handheld Max.

During the kick off in Liverpool it was decided that some persons of different project partners in Spain and UK should start getting training and practise with the (BCG) technology as soon as possible as an additional preparatory action. The laser is allowed to be used in almost all circumstances but very strict rules such as stay away from critical areas such as road traffic, trains and aircraft. Also birds with little chicks and/or eggs should be respected. This is part of the animal-friendliness perspective of Bird Control group. All the equipment is developed to control birds and the aim of the Laser Fence project is to extend the application to reduce rodents and game. Egbert Sonneveld is more than prepared to start experimenting especially on rabbits like for instance on the Life ‘Operation CO2’ plots in Ayoo de Vidriales, where the rabbits have been and are a serious threat to agricultural and tree production.

The whole BCG team is present being Steinar Henskes, Tim Sprang and Joep Everaers. It was also decided to add Gijs Groen, sales manager Europe, to the BCG Life project team since he is looking forward to involve several of his customers and country resellers in the UK and Spain to follow the results of this innovative project. Gijs is brought up to date with the project details and will help Joep to train almost all project partners with the equipment.

Egbert traveled back to Spain with an Agrilaser Handheld Max which is the most powerful of the handheld series. Egbert is going to check with Santiago Martinez of Iris how to observe the effect of the laser on the animals in the dark.